Everything went smoothly at the airport with everyone getting registered on time. We had an hour delay at Detroit because of the thunderstorm that was in the area. We finally left for Rome at 6:20 p.m. There were 22 people going on the trip total. Besides myself, I had two other chaperones going, Kristen Salerno and Tamara Miller.
We arrived at Rome at 9:00 a.m. We were met by Marisa, an assistant to Alessandra our tour director. Marisa’s job was to pick us up and get us through customs. Alessandra, who is from Italy, met us outside the airport. She said that tour guides who are not registered with the government could get fined. She was hesitant about guiding us outside the city.

The group from Louisiana arrived at 9:55 a.m. The group leader’s name was Donna, who has taken quite a few groups overseas and in the US through EF Tours and EFS. She had mostly adults with only 5 kids, a total of nineteen in all.

We left the airport to Rome. We had to stop outside the city to get the bus permission to enter the city. I think it’s because of the Jubilee 2000 celebration and because of the government trying to get more money. We arrived at La Pergola and had to wait until the room were ready.

We divided up to go out and explore and have lunch. Four or five people stayed at the hotel. I took 3 people to explore. We saw a supermarket and went in and bought stuff. I got a 6-pack of Energade, a knockoff of Gatorade. The tag said 1790 Lira and so I thought I would try to see if that was the actual cost, as one dollar is approximately 2000 Lira. I ended up paying about 10000 Lira as it was 1790 Lira for one bottle.

The majority of the others went to a pizzeria/trotteria close to the hotel. They read the menu and sat down. Instead of ordering, they were served the first course of a meal. They received two other courses and had to pay 20000 Lira total for the meal. The adults thought about stopping midway through the meal, as they weren't sure how much this was going to cost. The students thought that it would be rude to do that, so they all stayed. It was a great time, as they saw some culture and they posed for pictures with the restaurant staff.

We got to our rooms early and so people napped, showered, and/or changed. At 3:00, we took a public bus to see the Trevi fountain and the Spanish steps. we did this to see some of the things that we were going to see later. Alessandra thought that because of the bus problem in the city, we might not see all the sights that we were supposed to see.

Ryan, Steve, Jamie, and Ted were approached by people that proceeded to start tying strings together to put on their wrists (for cash, of course). Jamie said, "no", Steve ended up paying 10000 lira, and Ryan paid 10 dollars American. Ted got yelled at for not paying any money. A memory for the boys.


We took the bus back and had a meal of toast with fresh tomatoes on it, chicken and potatoes, and fruit for dessert. Afterwards, we walked back to the hotel to relax and gear up for the next day. Along the way, I helped with phone cards, helped get more blankets, take kids to the store to get more food, and chatted with Tamara and Valerie.

Everything went smoothly at the airport with everyone getting registered on time. We had an hour delay at Detroit because of the thun... 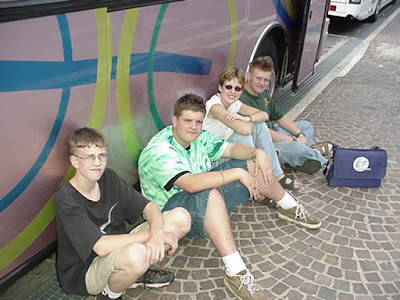